Share All sharing options for: Despite good effort, Dallas Stars fall 1-0 to Sharks 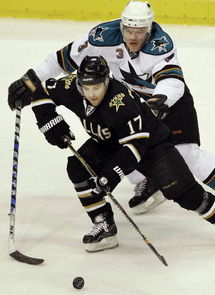 These are the tough games to swallow. Despite missing Mike Modano and then losing Toby Petersen halfway through the game, the Dallas Stars were able to muster a great effort against the top team in the league. I just wasn't enough as they were unable to score on Sharks' goalie Evgeni Nabokov and lost 1-0 on a late game goal.

With Brad Richards, Mike Modano and Toby Petersen out, the Stars played nearly half the game with just one true center on the ice. It was a classic example of guys stepping up and playing together as a team, something we had not seen in a few weeks. But the line juggling and playing different positions eventually caught up to the Stars when San Jose came out strong in the third period and put the pressure on Marty Turco and the Stars. A Devin Setoguchi scorching wrist shot snuck past Turco midway through the third and that proved to be the game winner.

It was a great first and second period for the Stars. The Sharks were unable to muster any sort of sustained offensive attack the the Stars put continued pressure on the net in the offensive zone. Unfortunately they weren't able to really have that presence in front of the net needed to get pucks past Nabokov. If your plan is to funnel pucks to the net and generate chances off rebounds, well you need to have guys driving the net to bury them. At times the Stars were able to cause some havoc in front but for the most part the Sharks defense held them off. The Sharks also made some key blocked shots at exactly the right time. With the Stars really pressing in the final minutes San Jose did everything possible to not allow any pucks to get anywhere near Nabokov.

When you outplay a team for most of the game, put more shots on net and generate more scoring chances and yet you lose, it's going to be the one little thing you do wrong that will hurt you. In the third period the Stars weren't able to sustain pressure like they had in the first two frames and got into a cylce of dump, chase and turnover the puck. A turnover just inside the offensive zone resulted in a rush the other way, with Setoguchi speeding past several Stars defenders and wristing the puck past a sliding Turco.

While it's nice to say the Stars played well, and or darn it came just a bit short, more importantly this puts the Stars in a very tough place in the standings. Once they had a lock on 5th spot in points percentage yet now sit barely ahead of Edmonton in 7th. There is a critical three game stretch for the Stars now, facing St. Louis, Anaheim and Pittsburgh in the remaining games on their home stand. If the Stars can win these three games it will put them back into position to move back up the standings. Any more losses and things could start to spiral horribly in the wrong direction.

It's a cliche, but every single game is more important than the last.

Evgeni Nabokov, San Jose: 29 of 29 saves and was solid all night long. Never allowed any egregious rebound opportunities and made several spectacular saves.

Devin Setoguchi, San Jose: Scored the games only goal on a terrific wrist shot from the far side.

Marty Turco, Dallas: Once again made several incredible saves to keep his team in the game.