Share All sharing options for: Relying on Marty Turco could be a dangerous game for the Dallas Stars

There's no doubt that the Dallas Stars' playoff hopes rest on how well Marty Turco plays the rest of the season. He has started 29 straight games and it's doubtful he gets any days off the rest of the season. He is also playing some of the best hockey of his career in the past two weeks. He is confident and sure of himself, never wasting a motion and has returned to thwarting forechecks with his masterful puck-handling skills.

When the team started to really pull things together again and start winning games at a consistent rate, Marty Turco had yet to really get back to his dominant ways. The team rallied around their goalie and the offense helped carry the team, winning 4-3, 5-4 and 6-5 both in regulation and overtime. Eventually the defense and goaltending started to come around and the Stars played a remarkable five game stretch where it seemed everything the team did worked perfectly. In that span they beat Detroit, Columbus, Florida and Calgary and played as dominant a game of hockey as the team has enjoyed in a very long time. 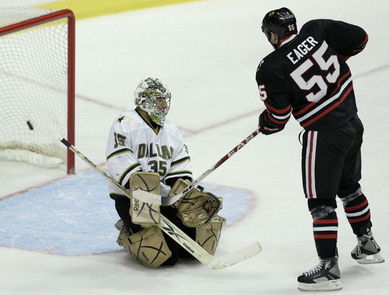 Then the Stars fell into the trap of not being able to muster a consistent effort each night. A lackluster performance in Colorado resulted in a 10-goal outburst at home against the Rangers. It was a trend that has repeated itself nearly every other game: a poor, non-energetic effort turned around the next game into a close win. Yet no the same theme has stayed true in every win or loss the past few weeks: It wouldn't have been even close if not for Marty Turco.

Right now the only thing keeping this team from falling to pieces is Turco. The Stars have lost three key veterans with injuries to Sergei Zubov, Brenden Morrow and most recently Brad Richards. The fact that this team is still in the race for a playoff spot is testamount to how well this team can adapt and come together for a singular goal. Yet lately this team has looked tired and has not been able to win all the position battles they were dominating just three weeks ago. Marty Turco has become the rock the Stars have stood on to win the close games yet for this team to have any success down the stretch they must return to the level of play where the team supported Turco.

Tonight the Stars face the San Jose Sharks in an extremely important game that has serious playoff standings implications. For the Stars to have any chance to win they must set the tone and pace of the game and not fall back on Marty Turco as a crutch. No more defensive blunders in front of the net, no more taking dumb penalties early in the game. Generate scoring chances and more importantly, find a way to cash in on the chances afforded to you. The Stars need to get back to funneling pucks to the net from anywhere on the ice and causing havoc to ensue in the crease.

When a team has lost some confidence they don't press as hard and tend to think and react a tic too late. Even when playing a defensive minded game this can be the most dangerous approach a team can have. It allows the opponent to dictate the pace and they put the pressure on you and not the other way around. You start chasing the puck and while you're busy laying out big hits, the other team is moving the puck and scoring.

For the Stars to get past this blip in their schedule they must play like the team that knew they had to set the tone to have sort of chance to win. they must say to themselves that although Marty Turco is back there and is playing out of his mind, he cannot win these games all on his own. The Stars must become the dominant force they were of three weeks ago, behind the offense of Ott, Neal, Lehtinen, Ribeiro and Eriksson. Getting two goals from your fourth line is swell, but it's your top line that needs to set the tone.

Hockey is the ultimate team sport and the goalie can only carry you so far. If the Stars want any further proof of how a goalie can play lights out and yet still lose a playoff series, check out the series of 2007 against Vancouver.