Stargazing: Are the Chicago Blackhawks the new achilles heel of the Dallas Stars?

Share All sharing options for: Stargazing: Are the Chicago Blackhawks the new achilles heel of the Dallas Stars?

The Dallas Stars host the Chicago Blackhawks on Saturday, February 21 at 1:00 PM CST.

For years the Dallas Stars have always had problems with the Detroit Red Wings. Knocked out of the playoffs in 1995 and 1998 by the Red Wings before winning the Stanley Cup in 1999. Some say the only reason the Stars survived to get to the Finals was because Detroit choked against Colorado, whom Dallas matched up more favorably with. Marty Turco was 0 for 11 in Joe Louis Arena in the regular season until just a few months ago when he finally led the Stars to win in Detroit. There was just something about them. The Stars have always built themselves around a controlled, disciplined and defensive minded philosophy that is the opposite of the wide open, spectacular offensive system that Detroit uses.

Yet after taking the Red Wings to game six of the Western Conference Finals last, the Stars are now 3-1 against the Wings this season. While they certainly didn't dominate Detroit, the Stars at least seemed to finally get over the jitters thats overcome them in years past when facing the Red Wings.

And then comes the Chicago Blackhawks. A team with several extremely talented offensive weapons that love to move the puck as fast as possible across the ice and wreak havoc on opposing defenses. This season the Hawks have also added Cristobal Huet in goal that has allowed the team to play more wide open while knowing they have solid goaltending behind them. 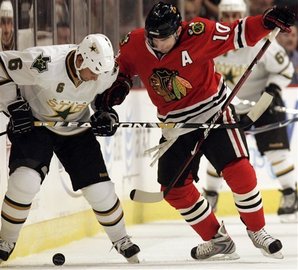 This style has once again completely dumfounded the Dallas Stars. The Stars are just 2-5 against Chicago in their last seven games dating back to last season. This year they are 0-3 and have been outscored 16-7 in the three games combined. Most recently the Stars were humiliated on the ice by Chicago in a 6-2 trouncing that wasn't anywhere near as close as the score would make you believe. It was a big game for the Stars who had a chance to draw close to Chicago in fourth place in the West, yet were unable to muster much energy while playing on the road in a back to back game.

The game tomorrow looms as yet another important game in a long line of big games down the stretch. With a win the Stars can build on their lead over Edmonton in the eighth spot and keep pressure on Vancouver and Columbus in front of them. While the Stars are technically behind in the standings, Dallas has games in hand over those around them.

Yet this game is even more important for another reason. The Chicago Blackhawks represent a hurdle not yet conquered by the Stars this season and for a team that has battled non-stop to get back in the playoff hunt, a win would go a long way for confidence. The Stars have a chance to turn the corner and really build momentum heading down the stretch and a win against a team that has dominated them all season could be just what the Stars need.

Follow the jump for news & notes on the Dallas Stars, including an updated look at the standings.

Mike Heika checks in from practice today without much new stuff to report, other than this great quote from Dave Tippett about Ray Sawada.

`Sometimes you get the opportunity and if you grasp it and run with it, you never know what can happen. There's a lot of players in this league that have waited for their chance, and when they got it, they've solidified their spot, and away they went.''

Mark Stepneski takes a look at the standings and while the Stars are technically in seventh place, once again their winning percentage puts them a bit higher.

Bill Nichols takes a look at how the Stars' power play will change with Richards out, including some talk about Trevor Daley out on the point.

"I've been getting a little more time this year, and I've enjoyed it," said Daley, who had six goals among 21 points heading into Thursday. "That was really my specialty before I got to the NHL. So I'm looking forward to seeing what I can do."

NHL.com has a great story on Brenden Morrow and his charity work in Canada.

Morrow leaves Thursday for Carlyle, where he lived until leaving for Portland, Ore., to play in the Western Hockey League as a 16-year-old. He plans to travel with his wife and 4-year-old daughter, Bryelle, to represent the NHL Players' Association's Goals and Dreams fund by handing out 50 sets of hockey equipment to less fortunate children.

TSN has an updated list of names who have emerged as possibilities in trades across the league.

Finally, Bob Sturm of The Ticket has a great video interview with Daryl Sydor.