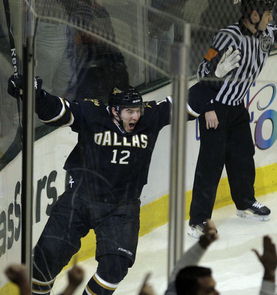 It was uncertain how the Stars would respond with Brad Richards out for six weeks with a broken wrist. Sure, the team said all the right things about guys needing to step up more and most having more responsibilities now, but how exactly would the team replace the offensive prowess and leadership Brad Richards possessed? For one, they gave Steve Ott the alternative captain "A", designating him officially as one of the key leaders on the team. For the other, circumstance required the Stars call up Ray Sawada and what could be a formidable fourth line was formed.

Brian Sutherby was acquired in a trade in mid-December and has worked his way to become one of the more consistent and physical players on the team. With Richards hurt, and Toby Petersen stepping up to center the second line, Sutherby became the center of the fourth line with Krys Barch and the freshly recalled Ray Sawada on his wing. The line is big, tenacious and skilled with the puck and the newly formed fourth line immediately made a difference in its first game.

The Sutherby line combined for two goals and three points in the 4-2 win over the Edmonton Oilers and together had 16 hits between them. Sawada scored his first NHL goal in his first NHL game on a pretty backhand late in the first period when he found an open spot in front of the net. Mike Ribeiro, late in a shift, hit him with a perfect pass as he cut across the middle and he slipped the puck past Oilers goaltender Dwayne Roloson.

Fabian Brunnstrom was another young Stars player who stepped up on the night, getting the game winning goal on the power play and adding another assist. It was a strong all around game for Brunnstrom who now has three goals and six points since returning from his ankle injury.

Perhaps the most notable performance on the night was the ferocious return of Steve Ott to the lineup after missing one game with an undisclosed injury. With the freshly sewn "A" on his chest Ott was once again the player on the Stars the opposition hated most. All game the Oilers were intent on gunning for Ott and several times it got them into penalty trouble. Yet Ott once again showed he has become much more than just an agitator when he made a great play in the third period. Skating with the puck out his own zone Ott crossed the blue line and immediately put on the brakes. Spotting Ribeiro down the far side he made a nifty cross ice pass that turned the defense around, allowing Jere Lehtinen to get free in the slot for the game clinching goal.

It wasn't the prettiest of wins but the Stars rallied together and played another great third period that never allowed the Oilers a chance to tie the game. Marty Turco was once again big on the penalty kill and made several spectacular saves in the final minutes to help preserve the game.

Notes and thoughts on the game:

Fabian Brunnstrom, Dallas: Perhaps one of his best all around games as a Star, including the game-winning goal in the second period.

Sheldon Souray, Edmonton: Once again was a monster on the point and was excellent in his own zone. Had nearly 30 minutes of ice time in the game.