Stargazing: Movin' on up

Share All sharing options for: Stargazing: Movin' on up

As stated before, the Dallas Stars moved into 6th place in the West yesterday without playing. The Stars are now just two points back of 5th place Anaheim and have four games in hand on the struggling Ducks. The Stars have ten of the next 13 games at home and are poised to make another jump up the standings. The question has now changed from will the Stars make the playoffs to which seed will Dallas have once the playoffs start. 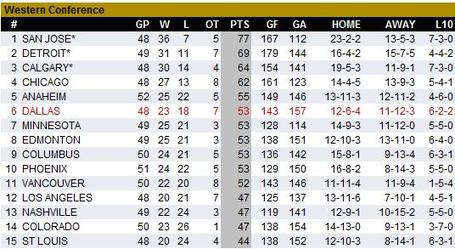 Richard Durrett reports in from the Stars' practice that Darryl Sydor is not in attendance after taking a puck off his ankle Saturday night. He is expected to play tomorrow night. Lines were the same as they were the past few games.

[UPDATE Mike Heika is reporting that Sydor is most likely doubtful for tomorrow's game against Calgary.

The Stars officially recalled Fabian Brunnstrom today from Manitoba. The winger didn't get much playing time in while battling the flu but was at practice today with the team in Dallas. Mark Parrish was also back with the team.

TSN.ca stats guru Scott Cullen uses some crazy formula to determine which players lay in on the line the most for their team. Stephane Robidas comes in at 6th place on his list of players who work the hardest and don't always end up on the score sheet.

Mark Stepneski takes a look at the numbers from January. The numbers say the Stars were pretty good.

Bad news on the Stars-trading-for-a-talented-young-defensemen front. Tomas Kaberle will be out four weeks with a hand injury. The trade deadline is a bit over a month away so it might not hurt a trade possibity too much, but it certainly doesn't help.

Finally, in their season long series that looks back the magical Dallas Stars Stanley Cup winning season, DallasStars.com takes a look at Pat Verbeek and his impact on that special team. It's a great read if you have the time. Also be  sure to check out the rest in the series that breaks down the season month by month.