First hand account of the Sean Avery debut in Hartford, plus a scouting report!

Share All sharing options for: First hand account of the Sean Avery debut in Hartford, plus a scouting report!

I had planned a trip to go see the Hartford Wolfpack take on the Manitoba Moose a while back. The Dallas Stars had several prospects on the team and I thought it wise to try and get a first hand scouting report on these up and coming players. Little did I know that I would running head on into the Sean Avery publicity train.

As most everyone knows the Dallas Stars were able to assign Avery to the Hartford Wolfpack, the AHL affiliate of the New York Rangers. The Rangers are serious in attempting to acquire Avery on re-entry waivers but would prefer that he gets back in hockey shape before doing so. What better way than to already have him on your AHL team?

So, I was there last night at the Hartford XLCenter to witness the debut of Sean Avery amid all kinds of hoopla and nuttiness. What did I think of his first game as a Wolfpack (Wolf?)?

Sean Avery played like a guy who hadn't been on the ice in two months.. He didn't really get into any of his zany shenanigans and actually looked pretty intent on getting back into the swing of things. There were a few scrums early on, but nothing special. The only thing Avery really contributed to the team were an incredible amount of giveaways, including one in his own zone that led to the game-clinching goal with less than two minutes remaining. He seemed hesitant to shoot the puck and was constantly forcing passes instead of taking the shot.  He had several breakaway opportunities but could never get his skates and stick in sync to make much of them, at one point tripping over himself crossing the blue line. Another time on a 2 on 1 he made a bad pass across the slot and squandered a good scoring chance. Maybe he was trying too hard to become a team player.

There's also no doubt that Avery belongs in the NHL. While he was certainly rusty he was faster, more tenacious and much better polished than those around him. It was his first game in two months and he a good amount of scoring chances, although he never did anything with them. I think it's good for Hartford and NY that and especially good for Avery that this seems capable of working out. Perhaps he's turned a new leaf and wants to be just a hockey player again. If so, then good for him and good for the Rangers.

This I do know: the fans in Hartford loved Sean Avery. I saw plenty of Avery t-shirts and a few Sean Avery NY Rangers sweaters in the crowd. There was also a good amount of positive "We love Sean Avery" signs around the arena. He got a pretty big response when he hit the ice for the first time as well. It's obvious these fans are glad to have him back.

The guys behind me were fairly disappointed he didn't start a riot. I guess they were bored with the new Sean Avery.

It also seemed as if the team was a big discombobulated and were way out of sync for most of the game. Does this have anything to do with Sean Avery? Most likely not, especially since Hartford hasn't done that well lately anyway.

Here are some quotes from Avery and Hartford coach Ken Gernander.

“Since Sean showed up, he has had a good attitude and mixed in very well with the guys, so everything has been top notch so far,” Gernander said. “We wanted to get him in all situations to get him ice time, and I thought he was quite effective at times. There were maybe one or two forced plays, but that’s probably just the product of his first game back and him wanting to be successful.”

“I feel good that Dallas has given me an opportunity to come here and play and that the team in Hartford has allowed me to come in and play,” Avery said. “I probably could have had a few points if I had buried a few chances or a couple other guys had scored, but other than losing, it was a pretty good night.”

Follow the jump for a quick scouting report on the Dallas Stars prospects on Manitoba.

Now for the real reason I went to the game: the Dallas Stars prospects.

The Dallas Stars have had several prospects play for Manitoba this season, including Trevor Ludwig and James Neal for a brief stint. I was looking forward to seeing Mark Fistric as well and seeing how he was coming along but the Stars called him up early Saturday morning. So I was left with just two players to really pay attention to: Defenseman Maxime Fortunus and right wing Raymond Sawada.

Before we get to those two, I want to mention a few things. The Moose have great sweaters. GREAT. A freaking moose with this nasty snarl on it's face? Where can I get one of the those? 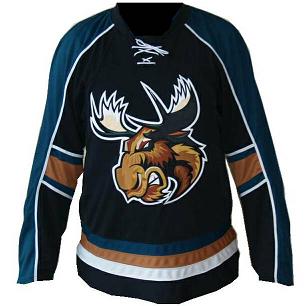 It was also great to see Mike Keane on the ice as captain of the Moose. The man is nearly 42 years and is still playing just for the fun of the game. He was one of my favorites during his time in Dallas and always seemed to come up with the big goals at the best times. I'm not surprised to see him still be one of the best players on the ice.

I also wanted to mention Manitoba's goaltender Karl Goehring. The man has to be the smallest professional goalie I have ever seen. I'm 5'8", 190 and I am bigger than this guy. The fact that he plays an extremely low butterfly style also makes him look like a 12 year in the pipes. I imagine shooters must be skating down the ice and their eyes light up when they see a foot of open net over his shoulders. But you know what, the guy is damn good. Sound positionally and very fast with the glove. I was very impressed and it was nice to see he got the first star of the game.

Onto the Stars' prospects.

I have to say I was impressed with Fortunus. He doesn't have a lot of size for a defenseman (6'1, 190) but he was sound positionally and made very smart moves with the puck. He was aggressive in the offensive zone and never hesitated to drop down low near the net to get a quick shot. He is a smooth skater and had good recovery speed to make up for any mistakes he made (which were very few). At one point he was able to catch up to Sean Avery on a breakaway and made a nifty play to negate the scoring chance without taking a penalty. He plays a smart, simple style of hockey and was rarely out of position.

Unfortunately his size doesn't allow him to be very physical and there were times he was pushed around pretty handidly along the boards. He also had trouble clearing space in front of the net and was unable to clear a rebound that led to Hartford's lone goal.

All in all, he seemed like a solid hockey player and was one of the better all around players on the ice. Whether he has a shot for the Stars at the NHL level is tough to say. The Stars already have a few undersized defensemen on the team and he seems to be lost in the crowd at the position.

Sawada is a big guy (6'2", 205) who seems unsure of how to use his size to his advantage. When I was watching him play he looked like a lumbering teenager struggling to fit into his growing frame, yet he is nearly 25 years old. He isn't a very smooth skater and at times had trouble making a quick move on the plays around him. He showed some decent puck skills with a few scoring chances and made some smart passes in the offensive zone but nothing he ever did on the ice really stood out. He was just another guy out on the ice and never showed signs of being able to take over.

It's unfortunate that a guy with his size couldn't have dominated more. He seemed like he could be a tenacious player at times yet never showed any interest in punishing the other team along the boards. If you're that big and you won't hit anyone, then you better start scoring and Sawada has yet to get in a groove in that department either (4G, 13A, in 44 games). He was sound positionally in the defensive zone, however and was adept at knowing the perfect spot to be to foil scoring chances.

Once again, not sure he has a spot on the Stars anytime soon.