Share All sharing options for: Marty Turco puts the Dallas Stars on his back in 2-1 win over Vancouver

I apologize for this being up so late. Some technical issues prevented the post from publishing late last night. Check back this afternoon for the game preview for tonight's game versus Chicago. 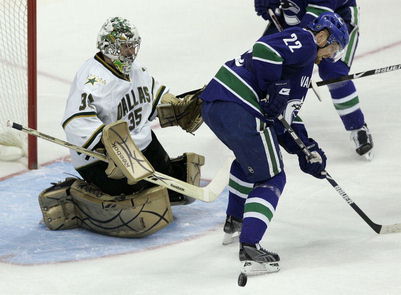 When a team goes on a run like the Stars have enjoyed the past few weeks, it usually means there's a goalie playing some exceptional hockey in net.

With Marty Turco playing one of his most spectacularly solid games of the season, the Stars held off Vancouver in a 2-1 win. The victory boosted the Stars back up into 5th place in the West and within seven points of Chicago, who they take on tonight on the road. It was an important win that slowed down a 2-2-0 slide and a loss would have dropped Dallas into 8th place in the West. Each game has become increasingly more important as the race in the West gets tighter and tighter. All the Stars need to do is keep on winning.

After Marty Turco let in a seemingly soft goal in the first period off a quick wrist shot by Taylor Pyatt he became a man on a mission, hellbent on atoning for the soft goal by denying anything that came his way. Aided by several shots off the post, Turco was constantly in perfect position to defend any shot on the ice. Rarely allowing any rebounds all night, Turco was exceptionally fluid when the puck was bouncing around in close.

Trailing 1-0 heading into the second period the Stars were able to take advantage on a early power play and tied the game off a Loui Eriksson deflection. The Stars had several more chances on an second extra-man advantage yet were unable to get anything past Jason LaBarbera, who turned in another sensational performance against the Stars. Twice he stoned Mike Ribeiro from point blank range.

Late in the period, Marty Turco saw an opportunity and took advantage. With Vancouver in the midst of a change he snapped a long pass down the right side to a waiting Loui Eriksson, who dropped a pass to Joel Lundqvist. With his first goal of the season, his last tally coming last season against Vancouver, Lundqvist snapped a scorching wrister over the shoulder of a screened LaBarbera.

With the Stars letting up off the gas in the third period, Turco made several big stops in the opening seconds of the frame. He would be as solid as ever down the stretch and once again led the Stars to a close victory.

The Stars now take on Chicago on the road in another game that has big Western conference standings implications. Playing Chicago twice in the next four games, the Stars have a chance to close the gap on the 4th place Blackhawks.

Three stars of the game:

Marty Turco, Dallas: Was spectacular between the pipes and carried his team to the win. 32 of 33 on the night, with an assist. I'll take it.

Jason LaBarbera, Vancouver: Once again had a monster game against Dallas, making several incredible saves during the night. Held his team in the game during the second period when Dallas put on the pressure.

Joel Lundqvist, Dallas: Was good to see him finally get a goal this season, and it was the game winning one at that.