James Neal had two goals and an assist and Brian Sutherby and Andrew Hutchinson also scored for the Stars on route to a 7-3 drubbing of the Columbus Blue Jackets on Saturday night. The game was an important one in the standings, with both Dallas and Columbus fighting for a playoff spot and the Blue Jackets two points ahead of the Stars. A loss would have dropped the Stars all the way down to 11th place and have negated any momentum gained in the big win over Detroit.

Yet the Stars continued their crisp, hard working play and jumped out to an early three goal lead. With three goals in the first 11 minutes of the game the Stars also chased rookie sensation Steve Mason from the net. The Blue Jacket's backup, Wade Dubielewicz, had just recently been called up to the NHL and was still waiting on his personal goalie pads to be approved by league officials. 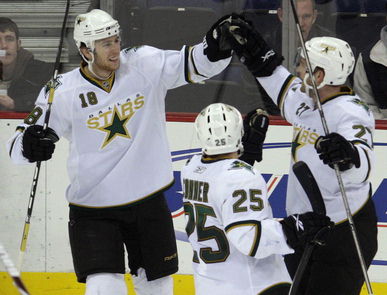 Columbus would fight back with a late first period goal and a power play goal early in the second period. For the first 12 minutes of the second period the Stars all of sudden became lackadaisical and careless with the puck and the Blue Jackets poured on the pressure. Things were uncertain for a time and the Stars looked like they might allow yet another comeback after going up a few goals.

Yet the Stars have changed over the past few weeks and despite an energetic let down for a long stretch they got their legs back under them and counterattacked. Two late period goals by Neal and Steve Ott put the Stars back up by three goals and the team could breathe a bit easier heading into the third.

Columbus scored yet again early in the third but Trevor Daley sealed the win minutes later with hard shot from the point. Hutchinson would score late in the third off a fluttering shot and even though things were hairy for bit, the Stars cruised to a big win.

James Neal, Dallas: Two goals and an assist and strong all around play. Was a force around the net and won battles on the boards all game.

Mike Modano, Dallas: Was dominant in the faceoff circle (68%) and had two assists.

Loui Eriksson, Dallas: A goal and an assist. Was flying around the ice from the start and set the tone for the Stars with his energy and hustle.

There's still a long way to go and the fight is definitely not over but with the win last night the Stars move into 7th place in the Western Conference. 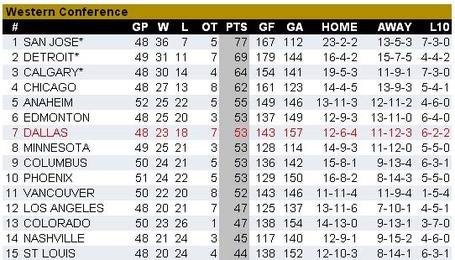 Just a few months ago the Stars were in 15th place and looked dead to nowhere. While the turnaround in this team is especially evident on the ice it's also rewarding to see the move up the standings as well. The Stars have been helped by poor play by Anaheim and Vancouver as well as their own dominance of late. Since January 24th the Stars have jumped five spots in the standings. Amazing what a four game winning streak, in regulation, can do.

The way the team's banded together to play a certain way is most important. We're going to need to continue to do this. Even tonight when they started scoring you didn't see too much panic in our game. I felt like we were in control for most of the game - and that's the way we like it.

We created our bounces tonight. Our PK really came through, and we need to keep improving as we go.

We haven't always been perfect in the last few games, so we are learning, and this was a learning experience. What we are seeing is we're slowly becoming more relaxed and trusting ourselves. That's helping us make the little plays that are leading to big wins.

We were opportunistic early. We had the early lead and the game was probably played even. [James] Neal's goal to push the lead to [4-2] was a huge goal. After that, anytime they had any kind of push, we were able to rebuff it and get one back on the board and push the game along.

(Neal's) had a few down games, but tonight was his best game in a couple weeks. That's what we need from him every night. He can be a dominant player if he brings this consistently. That goal to get us to 4 was huge. It gave us some cushion and we were able to keep pushing it the other way. That dictated the game.

You're going to have your highs and lows, and obviously you don't want your lows to be too low. It's a learning experience and I've got to learn. It was nice to get on the board after not scoring for a while. I've played with Mo all season, and you can't ask for a better guy to play with.

It's such a tight race, and two points are so big every night. And tonight was probably one of the biggest.

You know, we got a lot of breaks tonight, but we created those breaks. Earlier in the year, our game wasn't in order and we weren't getting breaks. Now, we pay attention to the details of the game, and we get the breaks. I think that's usually the way it goes.