Film Review: Breaking Down the Victory Over Chicago

Share All sharing options for: Film Review: Breaking Down the Victory Over Chicago

Last night's victory over the Chicago Blackhawks was a big one for the Dallas Stars. It kept the team from sliding deeper into the bowels of the Western Conference standings and it reinforced the knowledge that this is a team with great potential. The Stars may be frustrating as hell at times and have been completely unable to string together anything resembling a winning streak, but they have the talent and and ability to skate with any team in the NHL. So far this season they've beaten Chicago, San Jose, New Jersey, and Calgary; yet at the same have flopped against Florida, Toronto, and Carolina.

The effort against Chicago, a tale of three separate periods, perfectly encapsulated everything that has worked this season for the Stars and showed what we should all be excited about for the future. Yet we also were witness to the same issues that have plagued the Stars all season. In one game the Stars showed all of the ups and downs of the entire season, all in one game.

In this edition of Film Review, we'll take a look at these issues, as well as break down how the Stars were able to counterpunch and pull off a stunning upset.  As always, click on the image for a larger, hi-res version.

Brad Richards took a high-sticking penalty early in the game and put a dangerous team on the power play. Despite their high-powered offense, the Blackhawks ranked just 13th in the NHL on the power play headed into the game, while the Stars had slowly started to get a hold of their struggling penalty killing woes that had plagued them early in the season. Despite this, it was immediately apparent the Stars were grossly outmatched when down a man, especially early in the game.

Below, you'll see the Hawks attacking scheme: put the puck on net, attack the net. Repeat.

This comes with 30 seconds remaining in the power play, and the Blackhawks have already used this attack several times and have come close to scoring. Here, Patrick Kane receives a pass from the corner, hesitates, and then fire a wicked wrist shot on net. The Stars have been working to try and keep the attack to the perimeter, but as you can see their PK box has collapsed considerably. What's more, the Stars are caught watching and reacting. As soon as the puck is shot, the Hawks attack the net and beat the Stars to the rebound.

Above: The Stars are caught looking, as Toews and Brouwer outrace Grossman to the rebound.

Above: Daley is outmatched and outmuscled as he fights to control the rebound. Marty Turco is woefully out of position 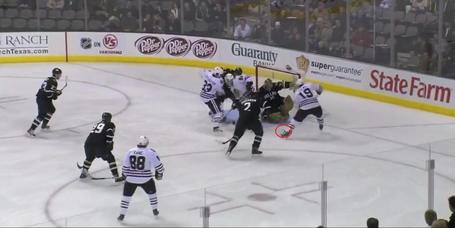 Above: The puck finds it's way to Toews' stick, as Turco slides back to his left to protect the post. The Stars are outnumbered 3 to 1 on the crease.

Above:  The Stars are lucky the puck did not go in as Toews pushes the puck off the pipe. Turco has fallen onto his side and has left the net wide open. Grossman has pushed Toews out of the play, but the Stars are still beat and outnumbered for the puck. True, they are on the penalty kill, but never should you be outnumbered 3 to 1 at your own net for multiple rebound chances. The Stars were lucky this time, not so much just 20 seconds later.

Above: Steve Ott is able to get to the loose puck, yet is unable to make a clean clearing attempt. His shot goes off the boards at a bad angle and pops right onto the stick of Brian Campbell. The attack continues. 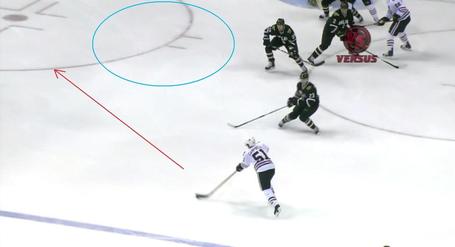 Above: After another scramble in front of the net, Campbell finds a WIDE OPEN passing and shooting lane for Dustin Byfuglien on the left point. Byfuglien fires a sizzling one timer that Turco stops... 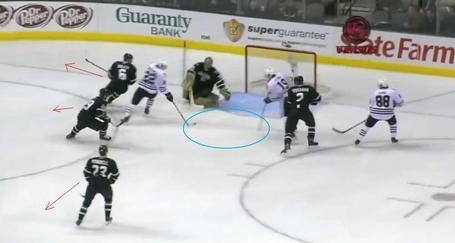 Above: The shot pops off Turco and right into the top of the crease. All three of the Stars on the left side have been caught watching and chasing the pass and shot from the left point. Trevor Daley, in particular, was racing across the crease and overskated the shot AND rebound. Both Brouwer and Toews have an open shot at the puck.

This goal, just a few minutes later, showcases exactly what Marc Crawford has been preaching to this team all season. While it does come on the power play, it also comes off the rush with the Stars putting heavy pressure up ice on the Blackhawks. This was extremely important for the Stars in the victory; as the Stars and Blackhawks traded goals back and forth, the Stars had to be able to sustain pressure in order to protect their third period lead. Too many times this season the Stars have put shots on goal off the rush with no results. Last night, the Stars had goals not just off the rush but with sustained pressure and forecheck as well.

Here, the Stars expertly move the puck from the defensive zone, across ice and back as Modano sneaks behind the defense as he cross the blue line.

Above: Brad Richards starts the rush up the ice, as Brenden Morrow (not pictured) has positioned himself just outside the offensive zone. Richard fires a perfect pass...

Above: Richards is able to not only fire the pass, but also lifts the puck over a defender's stick and maintain accuracy. Meanwhile, Modano works his way along the left boards.

Above: Morrow receives the pass and backs over the blue line into the offensive zone. The pass was so fast, so accurate, that the Blackhawks are caught (like the Stars earlier) watching the puck and forget about the extra man on the back side. Modano starts to find his way to an open spot in the ice.

Above: Morrow hesitates and perfectly protects and shields the puck with his body. His sudden stop as he enters the offensive zone gives him room as the defender overskates. Not one Blackhawk defender is looking at Modano. 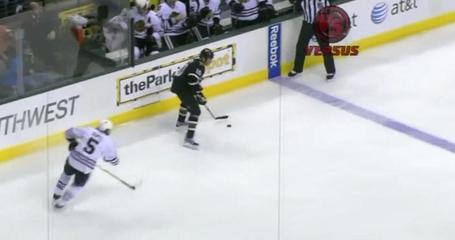 Above: Morrow creates plenty of space.

Above: Morrow fires a PERFECT pass.....

Above: The quick movement of the puck not only catches the Blackhawks flatfooted, but also keeps Huet from cleanly getting across the crease. He inexplicably dives headfirst to his right, not the recommended mechanics for a goaltender, and Modano buries the puck just inside the crossbar.

The movement of the puck from Richards' stick to Modano covered the length of the ice and perhaps 2 seconds on the clock. The Stars showed exactly how they have the ability to crisply move the puck and score as cleanly as any high-powered offense in the NHL. They showcased the same movement on Ott's game-winning goal in the third period and caught the Blackhawks flatfooted once more.

It's also important to note two things: First, after a horrendous first period in which they allowed 21 shots and three goals, the Stars were able to lock down the Blackhawks and keep the attack to the perimeter. The Stars adjusted to the attacking style of Chicago and protected the net much more cleanly; while they still allowed a good number of shots, you didn't see those easy chances from two feet out that were showcased early on. Second, the Stars were able to comeback and win not only with with crisp offense, but the help of some lucky goals and bad goaltending by the Blackhawks.

You'd like to see the Stars be able to be prepared for the Blackhawks from the start of the game, yet it was good to see how the Stars adjusted as the game went on. Still, the defensive breakdowns in front of the net were the same we'd seen all season long. Was this just a product of the young defense, or the impressive offense by Chicago? Whichever it was, the fundamentals of defense remain the same.