The 'No, Really! My Allegiances Are Not Split' Game Preview: Chicago Blackhawks @ Dallas Stars (7:00 pm CST)

Share All sharing options for: The 'No, Really! My Allegiances Are Not Split' Game Preview: Chicago Blackhawks @ Dallas Stars (7:00 pm CST)

Update by Brandon Bibb at 5:30 CST: A few updates to give you.

First, Stephane Robidas should still play tonight, even though he took yet another puck to his beleaguered face during practice on Sunday. According to Mike Heika, he had a procedure yesterday to push his cheek bone back out after the slap shot he took during practice pushed it in. He'll obviously wear a full cage.

Second, because the game is on Versus and because Darryl Reaugh will provide color commentary on the national television side, Bob Sturm will slide into the radio booth alongside Ralph Strangis.

First off, a disclaimer. Those of you who've read my bio know that I when I became a fan of this great sport, I followed two teams. The New York Islanders and the Chicago Blackhawks. And for those who haven't read my bio...now you know.

Rest assured, I'm still a Stars fan first and foremost. Also rest assured I got absolutely zero satisfaction out of the Hawks four wins over the Stars last year. In fact, I've love nothing more than for the Hawks to continue to lead the West, grab that number 1 seed, but still lose three more times to the Stars, so long as it means Dallas wouldn't have to face Chicago until the Western Conference Finals.  If that were to happen, I'm not really sure what I'd do. It'd be like a Rangers versus Red Sox ALCS.

But enough about this game from my own personal angle. For the Stars, it represents yet another opportunity of late to bounce back from a disappointing loss. And was Saturday night as disappointing a loss as they've had in a long time.

And they hope the short term elixir is a visit from the top team in the West?

A closer look at the Stars and Hawks after the jump...

To that end, Marc Crawford decided to juggle the lines for practice on Monday primarily because of the combined and putrid -10 plus/minus that the Brad Richards line put up. So tonight, expect to see Jere Lehtinen and and the newly minted Swedish Olympian Loui Eriksson on Richards' wings.

"I think the Richards line has been giving up way too many chances," Crawford said. "They've been getting other teams' top lines of late and when you give up chances continually, you've got to do something. That's what we've done.

"On that line now we've got probably our two best defensive players, who are both playing well offensively, to play with Brad. Loui can play both left wing and right wing, so it's not much of a change for him."

Also, the Stars should get much healthier for this one. Marty Turco and Brenden Morrow both missed Saturday's game due to illness.

Both players returned to practice on Sunday and the two off days between games should give them enough recovery time to get back into the lineup.

Also getting back into the lineup will be Trevor Daley, who missed five games with a shoulder injury. He was activated off IR yesterday. But don't expect Mark Fistric back in the lineup tonight.

After a drama filled offseason that saw the Hawks nab Marian Hossa and Tomas Kopecky away from their rivals and John Madden away from New Jersey in free agency, the rest of the summer saw Chicago involved in a story line that I'm not even sure Hollywood could have written a script for it.

For one, there was a paperwork snafu involving the qualifying offers for several of Chicago's RFA's, including Cam Barker and Kris Versteeg. The Hawks were able to scramble and sign all of their RFA's to deals. But the 'embarrassment' was enough to cost Dale Tallon his job as GM and cause jilted free agent Marty Havlat to level charges of sabotage against his former employer.

And then Patrick Kane had to get drunk in his hometown of Buffalo and punch a cabbie out over 20 cents. The incident has been immortalized in the annals of Photoshopping with the following: 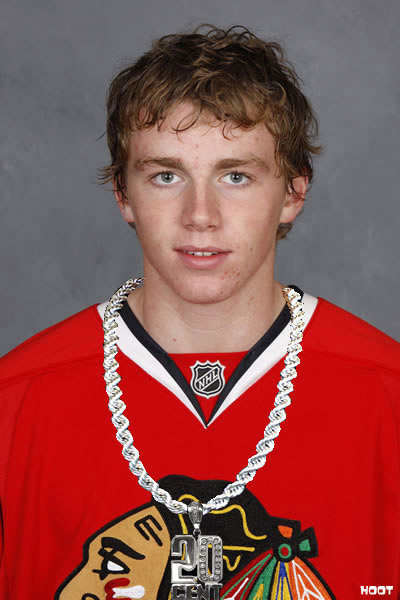 Fortunately, the Hawks have been able to put all that behind them by racing out to a hot start. And the catalyst, I would argue, hasn't necessarily been Kane, Jonathan Towes, Patrick Sharp, Duncan Keith, Kris Versteeg, Cam Barker, or even Hossa, who missed nearly the first two months of the season with a shoulder injury suffered during the Red Wings' playoff run.

No, if you asked me to name one part of the Hawks game that has sparked them more than anything, I'd say goaltending. And if I told you back in October that it would be the catalyst to a hot start, you'd look, point, and laugh.

But Cristobal Huet's put up a sparkling 2.01 GAA and his backup, Antti Niemi has gone even lower with 1.98 mark.