Stargazing is a daily assortment of Dallas Stars and Texas Stars news, and whatever other random ramblings are bouncing around inside our heads.

After a five game road trip that ended with back to back losses and two injured defensemen, playing a hot Detroit team seemed like a real tough spot. Luckily for Stars fans, we have Karlis Skrastins on our team.

Despite missing Trevor Daley and Mark Fistric to injury, the blue-liners were the key to victory Saturday at American Airlines Center. Skrastins had a three point night, and the Stars defense kept Detroit off the score sheet in the final period to actually finish off a rare 60 minute effort. Maxime Fortunus had a solid NHL debut, and helped Dallas to a victory in a game where they managed only 21 shots on Jimmy Howard. As Art mentioned yesterday, their fundamentals were much improved over the game in Atlanta.

The joy of watching all of those Red Wing "fans" leave disappointed yesterday aside, this victory was a must have over the team that is directly in front of them in the standings. With the two points in regulation, the Stars merely kept pace with Detroit and pulled a little closer to the pack. They remain in 9th place, with none other than the San Jose Sharks coming to town tomorrow night. A win over Detroit is fun, but it needs to be part of something bigger if it is to be truly meaningful.

San Jose and Los Angeles are a mere 6 points ahead of the Stars. If they could finally "put something together", the hill to climb is not all that tall. Look at what one lousy win has me saying...

After the jump, quotes and reaction to yesterday's big win...

Mike Heika was complimentary after the game...kind of...

It doesn't matter that the Wings are without some of their best players or that Detroit goalie Jimmy Howard had a less than stellar game. The key for the Stars is they did not go to overtime, they did not blow a lead in the third period, they did not stumble out of the gate and allow an opponent a huge lead.

And that is something the Stars didn't do against Atlanta, Carolina or Los Angeles in recent games.

But there are still some serious problems in the game of this team. They still struggle to get the puck out of their own zone at times, they still make big mistakes in coverage, they still allow some not so great goals. Now, they will tell you that every team makes those mistakes, and that no team is perfect. And I get that. But it just seems these Stars make those mistakes more often than they should.

The inability to get the puck out of the zone at times was ever-present, and maddening. Winning is truly a wonderful deodorant.

For the other teams perspective, be sure to visit Winging it Motown:

On an afternoon in which the Detroit Red Wings had a 33-21 advantage in shots and a 63-33 attempts advantage on the road against the Dallas Stars, it would seem likely that they would get two points out of it.

But a series of bad defensive plays, odd bounces, and a mediocre performance by Jimmy Howard negated a pair of three-point performances by Todd Bertuzzi and Pavel Datsyuk gave the Stars the 4-3 victory Saturday afternoon.

Karlis Skrastins had two goals for the Stars, including the game-winner 1:16 into the third period.

Bertuzzi, on playing with Datsyuk: "On my goal, he took four guys with him and still had the patience and poise to make a play like that, so it makes it pretty simple, I just have to get into the right spots." ... Jimmy Howard, after making 17 saves: "I felt great out there. It's a funny game sometimes, this game is. The second one, it goes off Neal's shin pads. And the third one, Stuie (Brad Stuart) blocked it and I never picked it up until it was right on Neal's stick and he fired it into the net. They got a couple of lucky bounces out there."

It doesn't matter how they score goals, not even if, for example, they went off someone's face. Call it lucky if you want, I think we'll take our two points, thank you.

The Dallas Morning News had high praise for Brenden Morrow:

Of all the impressive plays Saturday in the Stars' 4-3 win over the Detroit Red Wings, Brenden Morrow's in the final minute of the game said a lot.

Morrow lay out, blocked a shot and cleared the puck on a penalty kill that pretty much sealed the game.

When Brad Richards was whistled for slashing 190 feet from the Stars' goal with 26.4 seconds left in the game, you just knew the game would be tied. In a game where nothing was being called, you knew the Stars would regret the only penalty of the third period.

But Morrow made a big play.

I think that's an excellent point. There was commitment out there yesterday.

Quotes from the locker rooms...

"I thought the defense really stepped up tonight," Stars coach Marc Crawford said. "They recognized how much onus was on them and how much responsibility they had to have. Tonight, I thought our guys really paid attention to details. We backchecked hard, we recovered pucks real well, I thought we had an identity tonight of a team that wanted the puck and played strong defensive hockey. Yeah, there were a couple of mistakes, but there always is in a game."

"It was great to score early," Crawford said. "I thought that gave us a huge boost, you score a minute and a half into the period, it just puts so much more belief into the team. We knew that the one line you had to watch, so we felt confident, I thought the confidence got enhanced by the goal by Skrastins."

"I thought the blocked shot by Brenden Morrow was very significant, and that was kind of the effort we got tonight," Crawford said. "Guys paid the price and that sort of stuff is infectious throughout the group, people blocking shots, battling hard - those are the things that end up equaling victories."

"We didn’t sit back, we put the same amount of pressure on them in the third as we did in the first and second and you got to when they’re so skilled like that," Neal said. "It was a good win."

"We played just as good in Atlanta and their goalie comes up big," Neal said of the Stars’ 6-5 overtime loss on Thursday in which he didn’t register a point. "We just tried to do the same things tonight and when things are going, they’re going, and it showed when I was going to the net - I get a little bit of a bounce off the pads and right on my stick. It’s a start. We held onto the puck more, we got to do that, we’re a good line when we’re cycling and controlling the puck."

"I was waiting for this for a long time," said Skrastins, who hadn’t scored a goal yet this season, his first with the Stars, entering the day. "I’ve had a couple of good opportunities the last couple of games, but the puck wasn’t going in. Tonight was one of those nights where I had a little bit of luck. I scored my first goal and then I scored the game-winning goal. It’s very exciting, but what’s important is that we won the game."

Marty Turco. He had some phenomenal stops but also allowed two questionable goals. That included one that came in and went through the 5-hole, though it wasn't moving very fast. Turco might have been screened before it went in. He's been inconsistent, much like the team. But he did make some saves late once the Stars got the 4-3 lead.

And finally, I was in no way responsible for this. I merely observed that there appeared to be some alterations to every urinal in the upstairs bathrooms yesterday at the AAC. Luckily there was an iPhone handy: 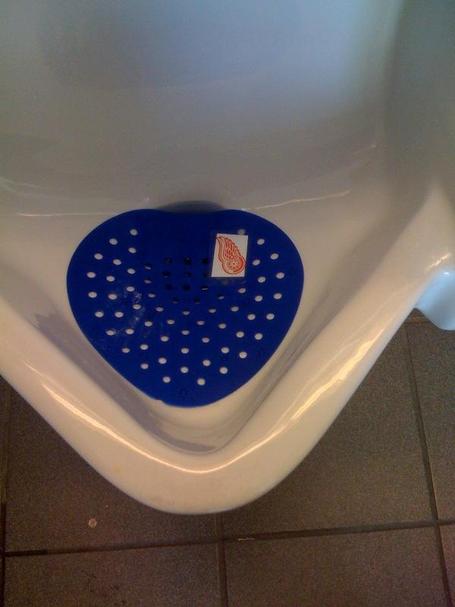 We at Defending Big D congratulate don't endorse vandalism of any kind, and we did didn't think this was funny at all.