Leading up to the NHL Entry Draft in Montreal this summer, we here at Defending Big D spent countless weeks debating which direction the Stars should go with their eight overall pick. There were a number of defensemen that could be available, as well as some tantalizing European scorers. We had some interesting conversation regarding Oliver Ekmann-Larsson, but there was one voice here that kept calling for one name: Scott Glennie.

A few eyebrows were raised when the Stars selected the speedy winger from the Brandon Wheat Kings, but many of the scouts I talked in Montreal were convinced it was a great pick.

Defending Big D recently had the chance to talk to Scott Glennie. He currently has eight goals and 12 assists so far this season for the Wheat Kings, and recently scored a goal and an assist in Brandon's 5-1 victory over Medicine Hat on Saturday.

I'd like to thank the Brandon Wheat Kings and specifically Matt McNish for arranging this interview with Scott.

Interview after the jump. 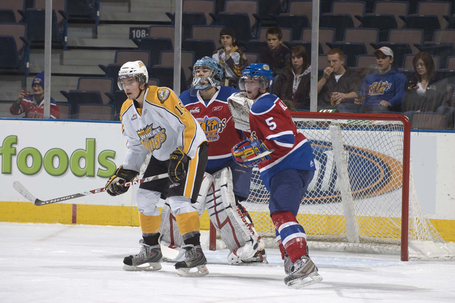 Are the Dallas Stars keeping in touch with you?

They've been talking to me quite a bit. They just sent their strength and conditioning coach down to Brandon to see me. I also met with Les Jackson down in Lethbridge; they've called me a couple of times. Ever since I was drafted they've been doing a great job of keeping in touch with me.

A lot of fans were looking forward to seeing you on the ice this past training camp; how frustrating was to have to deal with your groin injury?

It was a bit frustrating and a bit disappointing that I didn't get into any exhibition games and didn't get to play with any of the pros. At the same time, I had a great time while I was down there and they treated me well. It was a good environment to be in for myself and again, like I said, it would have been great to play with some of the guys and show fans how I can play. At the same time, just being down there was a good time.

Who did you spend the most time with during training camp.

I was rooming with Matt Climie, I know he's played a couple of games here and there. It wasn't just one guy in general, it was pretty much every guy kinda welcomed me to the team and basically just in the locker room with the guys and you get to know them while you're at the rink. Every guy there treated me very well.

Was it a bit of a shock to go from playing in the juniors to go to training camp with an NHL team?

I think you have to be aware of what's going to be happening once you get drafted and once you got down there. I guess it was a bit of a shock to be sitting in the room with a lot of those guys you grew up watching play hockey. But it didn't take long to get used to it just because of the type of guys they are, all good guys. And you grow up around guys like that, playing in the juniors, so it wasn't that big of a shock after a while.

What are some of the things the Stars have asked you to improve on this season?

I think what they want me to do (and myself) is to get up to an NHL size and then gain extra pounds and get stronger so that I can get to that pro level, and be at the strength of the guys at the pro level.

[Scott Glennie in Montreal after he was drafted, NHL.tv]

Have you been following the Stars much since you've been drafted?

I try to follow them, I look at the website every now and then. You see the highlights every now and then on TSN, but other than that they don't get on many broadcasting stations in Canada, so it's hard to actually watch them play.

The Stars made it a point to draft right-handed wingers in this year's draft. Have you been primarily playing right wing, or have you been playing center at all this season?

I started off playing center when I got here, but right now I'm playing right wing. I'm probably going to stick with that.

You were drafted just a few weeks after Marc Crawford was hired. With this new offensive system, do you think it will be more helpful for you, do they talk to you about this system at all?

I think it's going to be a great thing with Marc Crawford there, I know he's a lot more offensive guy than when Tippet was there and he's trying to turn them into a more offensive team. I think that's really going to help me out in the long run. 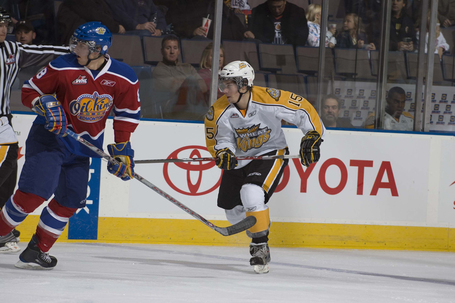 Who was your biggest influence as a player?

I think when I was younger it was probably Mario Lemieux; I watched him a bit when I was young. He was a great player to watch. I always wore number 66 on my jersey in summer hockey and winter hockey. I always enjoyed watching him.

Are you keeping in touch with any of the players you met in training camp?

Not really, not since I've been back. I've been fairly busy, and I'm sure they have too.

How do you like Brandon's chances at the Memorial Cup this season?

I think we have a good chance. I think right now we just had a good road trip and sooner than later we're gonna come around and start pulling out a bunch of wins. I'm not worried about that at all.