Two games down, and one consistent theme in both contests: the Stars take a bad penalty early in the game and give up a soft goal on the ensuing power play. For a team that has historically struggled to get off to fast starts in games and has been sluggish at best in the first period so far this season, going down a goal not five minutes in is a roadblock the Stars cannot afford.

Tonight the Stars face the Calgary Flames, a team that is 5-for-7 on the power play so far this season and is operating very impressively on offense. The mistakes made in the first two games cannot be revisited, else the Stars find themselves once again trying to claw their way back from an early deficit.

Dallas is trying a lot of new strategies this year under a new coaching staff, with a lot of the focus being on Marc Crawford's uptempo offensive system. Yet one aspect of the Stars' gameplan has been tweaked in the offseason and is going largely unnoticed: the subtle way in which the Stars have changed their penalty killing strategies.

In this edition of film review, we'll take a look at how these subtle differences of the Stars penalty kill has succeeded, and where it has failed.

The Setup: The Stars are once again on the penalty kill early in the game against Edmonton. After allowing a power play goal in the opening minutes against Nashville, the Stars are fighting to not allow the same to happen again.

The Execution: The Stars start off with an aggressive approach to the penalty kill, focused on not allowing the Oilers any space to move into the zone and set up their power play. The Stars are quick to the puck and employ an attacking style at the blue line. For the the first minute of the power play, this method works to perfection: the Oilers can't execute a pass in the offensive zone and the Stars get four easy clears right away without allowing anything close to a chance. 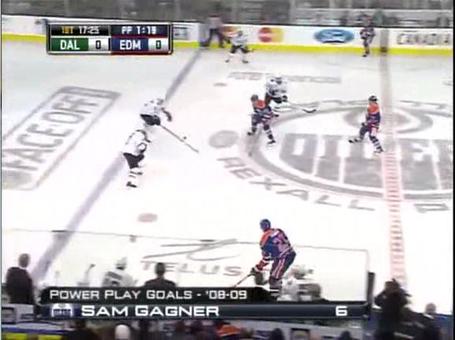 All four of the Stars' penalty killers play aggressive at the blue line, as the puck comes across from the neutral zone. Toby Petersen (2nd from top), disrupts a passing lane up the middle as the Stars defensemen (Daley and Grossman) quickly attack the loose puck, gaining control and clearing up the boards. 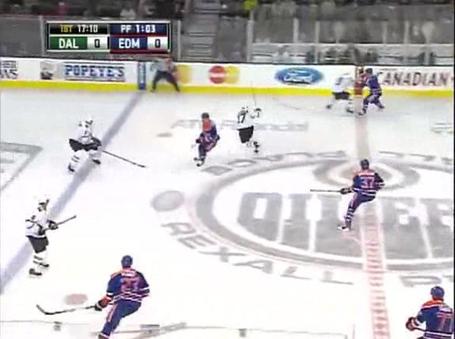 Steve Ott (top) attacks the puck carrier before he can reach the blue line, leading to bad dump into the zone. Grossman is then able to collect the puck and quickly clear the zone, again.

And yet, this attacking style led directly to a wide open chance in front of the net just seconds later. 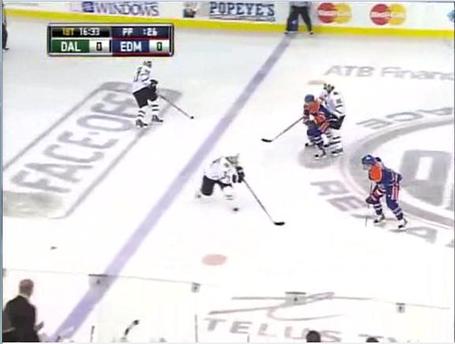 Once again, the Stars are aggressive at the blue line, forcing a dump in pass. Unfortunately, this time the Stars defenseman is caught flat footed headed into the zone and is beaten to the puck in the corner. 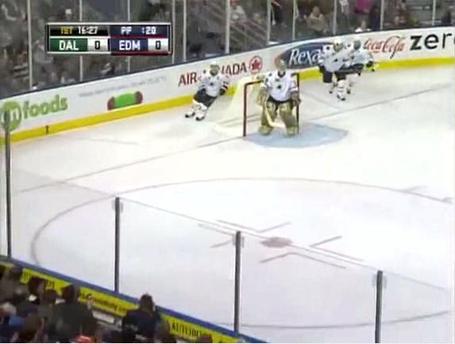 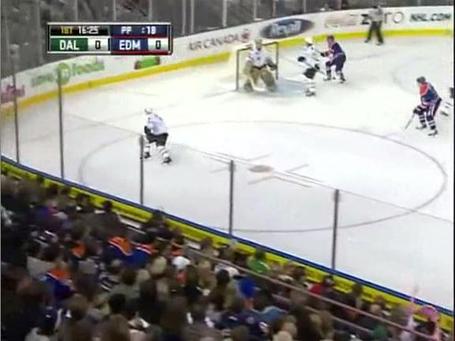 Ladislav Smid of the Oilers beats Robidas to the puck and slaps it back down along the boards behind the net. So we have: three Dallas Stars racing in one direction (from behind the net out), to all of a sudden change direction as the puck is slung back around the net once more. But this sudden change of direction has allowed the Oilers to gain position on the Stars. Mike Comrie (right) gains position in front of the net as the puck reaches Andrew Cogliano down low. Easy tap in for Mike Comrie off his pass. 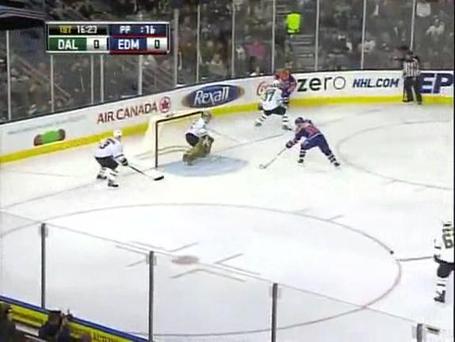 This should never happen. All of the Stars penalty killers are grossly out of position after being caught chasing the the puck down low, back high, and then down low again.

The aggressive approach the Stars took on the power play worked to perfection for the first 90 seconds of the penalty kill, but one slight misstep sent the players into a scramble to regain possession. Instead of maintaining position discipline inside the zone, the Stars were caught chasing and they paid the price.

The good thing is that the Stars have been tremendously effective at times using this system on the kill, but it's a risk/reward approach. Just like as in the other aspects of the team's transition to a new coaching staff and playing style, the penalty kill is not going to be perfect. But there are signs that this style can be very successful, if executed properly.