Stargazing is a daily assortment of Dallas Stars  and Texas Stars news, and whatever other random ramblings are bouncing around inside our heads. Note: These posts are not intended to be in-depth analysis articles, but rather a gathering of news from around the internet on the Dallas Stars.

Living on the East Coast, I made the tough decision to not watch the third period of last night's game. It was nearly midnight, the team was playing poorly (once again) and the Stars were down by three goals in a game in which they were being grossly outplayed. I honestly felt that this morning I would open up Defending Big D and see a game recap that had the Stars losing 5-1.

I should have known better. After all, this game was played at the Staples Center.

While I can't accurately speak to their level of play in the third period, I will say that looking at the boxscore and seeing that the Stars managed just seven shots in a period in which they needed to come out firing is a bit discouraging. I know they scored three goals and kept the Kings off the scoreboard at the same time, but this offense is designed to generate pressure on the net from all areas. That's just not happening on a consistent basis.

We'll have more on this iteration of the Dallas Stars and what we've seen so far this season tomorrow morning. I will say that after ten games, I still don't know what to think of the Stars and it seems they're still fighting to find their identity as a team. Another big test tomorrow, as the Stars take on the St. Louis Blues on the road, at 7:00 p.m. Central.

Former Dallas Star and current KTCK 1310 The Ticket radio analyst Brent Severyn will join us next week on Defending Big LIVE, airing next Thursday at 8 p.m. Central. Be sure to tune in.

Mike Heika shares his observations from last night, saying that it's tough to figure out this team on a night to night basis.

What's the old saying about experience teaching us that ``the more your know, the less you know.''

I feel that way about the Stars right now. They certainly have some talent. They certainly have some holes in their game. And they certainly are unpredictable. After having perfect gap control and a wonderful breakout from their backend against Anaheim on Wednesday, the Stars on Thursday were awful to start the game against the Kings. After shutting down the likes of Ryan Getzlaf, Corey Perry, Teemu Selanne and Saku Koivu against the Ducks on Wednesday, the Stars were helpless to even slow Anze Kopitar of the Kings on Thursday.

I'll agree the comeback was a bit iffy because of the Kings goaltending, but it was a nice message for this young team to not give up. The next time the Stars are down, players like Jamie Benn and Mark Fistric are going to believe they can help provide a comeback because of the energy they felt after that third period.

And the bottom line is this team is in the middle of seven games in 11 days with some fairly key injuries, and it has 12 of a possible 20 points (.600) through the first 10 games of the season. Phoenix is obviously for real and is leading the division, but Dallas is in a decent place right now. It knows it can be better. It knows what areas need to be improved. It even appears to have the ability to address those areas at times.

That's the important thing to remember: the Stars are in the midst of a very busy schedule. But this is something they're going to have get used to, since the entire schedule this season is packed because of the hiatus for the Winter Olympics.

Mark Stepneski has some thoughts as well:

There's not a lot to analyze in this one. The Stars were sluggish to start and finished strong. It was a reversal of Wednesday night in Anaheim.

As Marc Crawford pointed out after the game, they were playing their sixth game in nine nights. People may not like to hear it, but scheduling often is a big factor in how teams play. All teams go through it and have to deal with it, and it all evens out the in end. And the teams that do a better job of it over the long haul of the season are the ones that do better in the standings. Teams have to find a way to win, or sometimes find a way to get a point when faced with scheduling issues. The Stars did that in Los Angeles, although it was far from a Picasso out there.

James Neal had another strong game for the Stars. He scored on two great shots and that one Jame Benn scored on to make it 4-2 was quite a shot as well. That Benn goal was really big. It rattled Quick and got the momentum moving the Stars' way.

Brad Richards got back in the lineup and picked up a couple of assists.

Overall, I see it as a good point. It seemed like they were going to get zip on this night and they found a way to get something. Every point is important. Let's face it 4-2-4 is better than 4-3-3.

"I cut our guys a little bit of slack. That's six games in nine nights for us," said Stars head coach Marc Crawford. "You have that in this league and you're going to have some sloppy points. You wish you didn't have them, but you are going to have them. We had them tonight and I just loved the way we battled back. That’s a big point for us and it’s unfortunate that we didn’t get it all the way. But I think that we learned something tonight as well - if we stick to the habits that are going to allow us to be successful, then I think that will carry us a long way.

"It's not very often that game ten of the season is a real good game. We talked to our guys tonight and we could have ended in first place in the division, and that's what we wanted to do. We didn't have the kind of jump we hand the other night we had in Anaheim to start the game, but I was pleased with the way we came back."

"It was a good game, right, then the good old Kings came out in the third with a three-goal lead and starting sitting back, waiting for them to come. We cant play like that. It feels great. It almost didn't feel great - the way the game ended - but we got the two points and that's the most important thing" - Anze Kopitar

[On Loui Eriksson] "He’s so skilled, so deceptive with the puck and the stuff he does, it was good to have Brad back," Neal said of his usual center on the second line along with Eriksson. "He started that (tying) play. We got some chemistry going. We had that chemistry going the first two games and it kind of died off. It was a good boost to get Richie back and hopefully we’re on our way now." - James Neal

Brad Richards returned to the lineup last night, getting two assists. He's still not fully healthy yet, and I questioned whether he would make it through the game. But he gutted it out, and led the team in shots with three (although I'm pretty sure he got all his shots off on one play).

"I thought Richie was pretty good," Crawford said. "I'm sure somewhere between the first and second period, he was probably wondering about his decision to come back, but he gutted it out, and I think our team gutted it out. That's what we needed, we needed everybody contributing."

Jamie Benn has progressed from being "a pretty good kid, for a player who's never played above the WHL before", to becoming one of the top rookies in the NHL and is already being thought of as a contender for the Calder Trophy. Last season, the Stars' James Neal was in the running all year and finished 2nd in the league in rookie scoring.

This season, the landscape for the Calder is a bit cluttered, according to Puck Daddy:

But it's the players between Tavares and Hedman on this chart that have made the race immediately compelling. Evander Kane has likely played his way onto the Atlanta Thrashers for the season, and hulking defenseman Tyler Myers did the same for the Buffalo Sabres. Jason Demers has been a sleeper for the San Jose Sharks, playing with Kent Huskins at even strength and manning a power-play point with Dan Boyle on the first unit. Jamie Bennhas found a home with Dallas Stars standouts Brenden Morrow and Mike Ribeiro.

Currently, Benn is 2nd in total scoring among rookies and is fourth in plus/minus (+4).

What's great is that Benn wasn't even mentioned in the preseason projections for the Calder.

Perhaps the most frustrating aspect of the Dallas Stars game this season has been the inconsistencies with the defensemen; troubles in front of the net, an inability to cleanly move the puck in transition. The Stars know this is a problem, and their young blueliners are working hard on improving:

"There are crucial areas of the ice, and you just can't make mistakes there," said Trevor Daley, who is a veteran on defense at age 26. "As long as we make good plays at the right time, I really do think our team has the skill to turn little plays into big plays."

Crawford said the combination of good young defensemen with the puck-handling of goalie Marty Turco gives the team the potential to be very good at moving the puck out of the back end.

"To make a great breakout, there's two parts," Crawford said. "You've got to go back and get it and have your head on a swivel and see what your options are. And then the forwards have to help by making themselves available. And I thought both of those things happened so well for us [Wednesday], especially in the first two periods.

Andrew's Dallas Stars Page has the audio of Razor's appearance this morning on 1310 The Ticket.

Finally, some great stuff from Canada. The Kingston Frontenacs hosted Don Cherry Military Night last night, and donned some interesting jerseys for the game. For those that don't know, Don Cherry is known as a very outspoken hockey analyst whose trademark is to wear extremely over the top and ugly suits for television appearances.

Tyler Beskorowany, the goaltender for Kingston and Stars prospect, is pictured below in the Frontenacs' interesting garb. 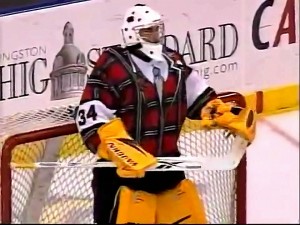 Hat tip to Andrew's Dallas Stars Page for the link.