Just a few months ago the Dallas Stars were written off as a disappointing, underachieving and dysfunctional team. The Sean Avery signing was a disaster and the team was struggling to cope with injuries to Brenden Morrow, Sergei Zubov and Jere Lehtinen while their star goaltender was having issues keeping the puck out of the net. The Stars entered December dead last in the Western Conference and a lot of folks were desperately trying to determine what was needed for the team to resurrect its season and become competitive yet again.

It turns out that all Dallas needed was a respected veteran, a feisty forward and the loss of one of the most incendiary players to ever play in the NHL.

Dallas traded for Darryl Sydor and also saw the return of Steve Ott to the lineup after missing 18 games with a broken hand. The Sydor trade was a move to not necessarily improve the talent level of the defense but to bring someone into the locker room that the players respected and who could settle down a struggling defensive group. Sydor's play and leadership have been instrumental to the turnaround of the Stars. The team now exhibits the hustle and determination that Sydor has played with his entire career, never more visible than during the game Thursday night in Detroit. The Stars were stifling on defense and out working the Wings for pucks, sacrificing their bodies to block shots and to clear loose pucks. And they still have plenty of room to improve.

Yet the most surprising aspect of the Stars' resurrgence has to be the play of Steve Ott. Always known for his antagonizing antics and his knack for drawing penalties, Ott showed last season that he also has the ability to be a goal scorer and playmaker. Lately he has also shown to be a leader and game changer. Playing on the top line with Mike Ribeiro and Jere Lehtinen, he has slid nearly effortlessly into the role Brenden Morrow has perfected as the Stars' captain. A gritty, never-give-up attitude and the ability to finish in front of the net has led to goals in three straight games and eight points in seven games. Even more importantly, he only has six PIM in that period. He is on the ice in critical spots and has made the big play every time it's needed. Ott is growing into a leader on this team and is already one of the most respected players in the franchise. Now he has shown he is a playmaker as well.

Much more after the jump.

Tonight the Dallas Stars look to continue their hot streak against the Columbus Blue Jackets. Columbus is 3-2-0 in their last five games but have won two straight, including a shutout win last night against Ottawa. They are 10-4-1 in their last 15 games behind the strong net presence of rookie Steve Mason who leads the league with seven shutouts. This is the third time the Stars and Blue Jackets face off this season with the Stars both teams 1-0-1 in the series. Both games have been high scoring affairs with a total of 19 goals scored in the two games combined.

While the win against Detroit was a big momentum grabber, the game tonight in Columbus is extremely important when it comes to the playoff race. With a win, Dallas can jump back into a tie with several teams jostling for position but will have those all important games in hand on those around them. 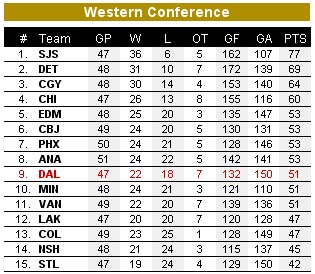 The Stars are poised to make a big jump in the standings. The key of course, is to keep winning. That's all.

The last time these two teams faced off saw the infamous fight between rookies Derrick Brassard and James Neal. Brassard injured his shoulder in the tilt and was lost for the season, ending the year for one of the league's most exciting and talented rookies.

Continuing the theme about Steve Ott's emergence as a team leader, DallasStars.com takes a look at Dallas' new playmaker.

With season totals of seven goals and 17 points in 31 games overall, Ott, 26 and in his sixth NHL season, is already edging closer to his career-highs of 11 goals and 22 points established last year. Certainly, part of his recent success has been his inclusion on a line with the crafty Ribeiro.

"The opportunity to play with those two guys, you’re going to get a lot of offensive chances," Ott said, "and that’s something that we’ve been getting a lot of lately, creating puck time and creating those scenarios where we have scoring chances. For us, if we’re not scoring on them, then something’s wrong. It’s great to be able to contribute out there and help the team out as much as I can and for our line, that’s something that we’re looked to do now."

The best part of the story is this great quote from Dave Tippett, who talks about his reasoning behind putting Ott on the top line.

"That was the thinking with putting Ott there, as a similar kind of player [as Brenden Morrow]," Tippett acknowledged. "He’s bringing a lot of the same attributes to the game that Brenden does on that line - hard around the net, coming up with loose pucks. Ribeiro is great when he has the puck, so as many pucks as you can create for him, the better off you are. Otter, just every shift, he’s going hard, he’s doing the things that allows himself to be successful and the line is working well together that way."

When the coach is comparing you to the team's captain you know you're having a good season.

The DMN has a great story up about Brian Sutherby and his play as a wing on the line with Brad Richards.

Mark Stepneski takes a look at Marty Turco's numbers this season and the disparity between the first few months and the last two. January has been his best month by far with a 2.37 GAA and .906 Sv%.

Mike Heika has the update from yesterday's practice and reports the Stars were feeling pretty good and had a lot of pep in their step.