Share All sharing options for: Stargazing: Feelin' good after a big win

Note: The past few weeks after we went live I have experimented with different methods of posts and how to put those into a daily routine. We've seen "What They're Saying", "Gameday" and the ubiquitos "News & Notes". I think I have found one that should stick...."Stargazing". Each day there isn't a game Stargazing will take a look at what's happening in the Dallas Stars world and around the NHL. It's a quick way to round up everything that's going on..and give it a proper monniker to boot. "Gameday" will continue as a preview of that day's game.

Some of my random thoughts on last night's game...

It didn't look too bad at the time yet when Krys Barch was slapped in the face with Chris Chelios' stick in the first period....he lost eight teeth. EIGHT!!!

The Stars' enforcer took a high stick to his mouth from Chris Chelios in the first period and lost eight teeth. The teeth didn't fall out. They were shattered ... through a mouthguard.

A mess indeed. What was even more amazing was that he briefly went into the locker and came back shortly afterwards to support his team on the ice. All the while proudly smiling and showing off his wounds.

"He reminded me of a young kid who gets his tooth knocked out for the first time," Stars coach Dave Tippett said. "It was like a badge of honor, and he came back to the bench smiling, and saying, 'I think I lost a few.' "

That right there is why I love hockey. They never showed it, but I can just imagine Barch sliding back onto the bench and smiling at his teammates saying, "Hey! Ain't this neat?"

Much more after the jump.

Fabian Brunnstrom started his first games with the Manitoba Moose last night, yet was unable to finish the game. There was a lot of speculation about whether he had reinjured his ankle but it turned out it was just the flu.

Manitoba coach Scott Arniel was asked what was up with Brunnstrom after the game and here’s what he told reporters.

"He has the flu," Arniel said. "He was questionable to go, but after warm-up he wanted to try it. He got out there and it just kind of overtook him."

His status for Friday's game is uncertain.

The player's felt good about the win last night and none enjoyed it more than Marty Turco. However, he was modest as usual and said it's all about the team.

"I've had zero wins here this century," joked the 33-year-old Turco, who had success at Joe Louis when he played at Michigan. "I don't want to date myself at all, but it has been a long time.

"But the way our team is playing can't really overshadow anything that I did or accomplished."

"It's big the way we played and our mentality tonight. We like to have the structure we showed tonight, and the power play came through for us. We showed some good work ethic against a good team in a tough place to play. I like the way our team is playing."

e are building some chemistry and starting to click. This is a tough building to win in, and that's makes it that much sweeter.

We wanted to outwork these guys, and two big power play goals right off the hop was huge.

It was a fun one. I grew up a huge Red Wings fan, and all my buddies are Wings fans and they let me hear about it when we don't beat them.

We won the special teams battle, and had a real good start. We need to stay even keel and keep pushing. It's a constant battle, but tonight was a step in the right direction. Three in a row is a good step for us, and we can do a lot of good things.

Since November 30th (That infamous date we'll keep using until the season ends), the Dallas Stars are 15-7-3 and have steadily climbed up out of the basement of the Western Conference. The Stars are also 5-1-1 in their last seven games. Most importantly, after everyone's concerns about whether this team can win in regulation, the Stars have won three straight by a combined score of 10-3. The Stars have turned the corner and are starting to build momentum going down the stretch.

While, officially, the Stars are sitting in ninth place in the conference they are tied point-wise with Edmonton and Minnesota who sit at seventh and eighth place with 51 points. Mark Stepneski takes yet another look at points percentage, and it shows just how high the Stars have climbed. 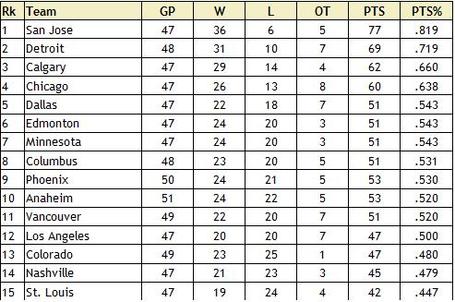 It seems now the question isn't if the Stars make the playoffs.....but what seed they will be.