The Dallas Stars have played the Detroit Red Wings three times this season and are 2-1-0 against the team that beat them in last season's Western Conference Finals. The two wins came in close games at home where the Stars were able to disrupt Detroit's gameplan and come away with big wins by a combined score of 8 to 5. The one loss: a 6-1 beat down at Joe Louis Arena that brought back all of the horrors the Stars have had playing in Detroit's home arena.

Marty Turco is 0-8-0-2 (two ties) with a 3.36 goals-against average in his career at Joe Louis. To say he struggles in Detroit is an understatement, but it's not just Turco that has problems against Detroit. The Red Wings have always been the opposite of the Stars, their ultimate nemesis and the one team that consistently gives Dallas the most fits. Detroit's playing style is nearly a perfect counter to the Stars', with a fast and speedy team that is able to attack the franchise's historically stifling defense. And while the Stars have been able to not get knocked around too much at home, playing at JLA has always seemed to bring out the worst in this team.

However, the Stars and Turco did exorcise some demons last spring when the Stars beat Detroit at home for the first time in Turco's career. It was a solid, inspiring team effort and the same mentality will be needed going into tonight's game. The Stars are fighting for a playoff spot; every game is more important than the one before it.

While the Stars have enjoyed a decent turnaround the past few months and are 3-1-1 in their last five games, the Detroit Red Wings are hitting a rough patch in their season. 2-2-2 in their last six games, including three straight losses, the Wings are looking to get back on track and what better way to do that than face a team they have historically dominated at home. However, if the Stars can jump ahead early and keep the pressure on it will become a bit easier to break apart a team on a backslide.

Henrik Zetterberg will not play against the Stars for precautionary reasons but the Wings will get back Pavel Datsyuk and Niklas Lidstrom, who return after being forced to miss a game for sitting on the All Star festivities.

Check out Winging It In Motown for a insider's look at Detroit.

Hockey historian Seamus O'Callahan takes a look at the standings and marvels at just how convoluted teams have become between fifth and twelfth place. The good news is that the Stars are playing better hockey those most of those they are jostling with for playoff position. He also makes this astute observation:

If you’re a Stars fan, you should also be big fans of the Sharks, Red Wings, Flames and Blackhawks the rest of the way (in games not playing against Dallas). In particular, root for these teams to win in regulation.

The way I see it, these four teams are going to have home ice in the first round of the playoffs and it should not hurt the Stars one bit if they continue their success for the rest of the regular season. Dallas needs these teams to keep valuable points away from the Coyotes, Ducks, Wild, Oilers, Blue Jackets, Canucks, Avalanche and Kings.

The Stars have climbed up from 15th to 11th spot in the Western Conference and have games in hand against those in front of them. 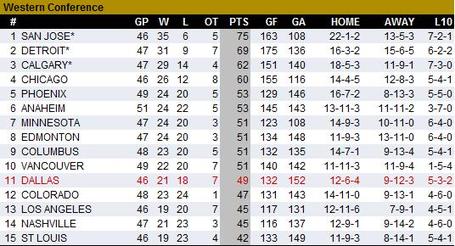 Of course, you have to actually win those games in hand for them to mean anything.

Mark Parrish didn't work out. Coach Dave Tippett said Parrish has the flu and may not fly with the team to Detroit and Columbus.

Chris Conner seems ready to play in Parrish's place (as he did Tuesday) and would love to play at Joe Louis Arena, as he grew up in the Detroit area. He looks good on the Modano line right now.

It'll also be interested in seeing Toby Petersen against Detroit, as he has been good in all three games against the Red Wings.

Dave Tippett with the quote of the day:

"We've played two excellent games against them here (in Dallas). It would be nice to win the series against them," said Stars coach Dave Tippett.

DMN story about how the Dallas Stars looked like they "figured it out" against the Thrashers.

I just think the played a bad team.