Share All sharing options for: Momentum squandered in 5-4 shootout loss 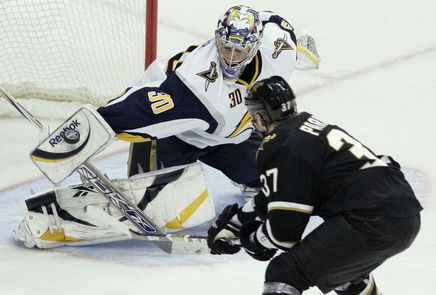 Last night's game was a microcosm of how the 2008-2009 season has gone for the Dallas Stars. Spurts of complete dominance gave way to defensive breakdowns and a lack of energy and motivation. Marty Turco found himself out of position on a number of occasions and then decided to flip the switch and made several brilliant saves in the third period and overtime. The Stars had the opportunity to crawl closer to the final playoff spot yet failed to make up any ground on Minnesota and stay four points out of eighth place.

Thoughts on the game:

>My biggest fear as the game progressed last night was that the Stars would continue their propensity of allowing teams back in the game after getting at least a two goal lead. Last night proved that this team has yet to learn how to put teams away. This is a trend that goes back a few years as the Stars have consistently been a team that plays better when their back is against the wall and they seem uncomfortable with being on top.

>Despite having several skilled and knowledgeable defensemen, the Stars lack any presence in front of their own net. Dallas is consistently getting beat to loose pucks in front of the net off rebounds or deflections and Marty Turco is having to deal with more screened shots than at any other time in his career.

>Continuing with that theme: Niklas Grossman needs someone to teach him how to use his size to his advantage.

>Mike Ribeiro: The fancy shootout stuff works every now and then....not EVERY SINGLE TIME YOU TAKE A SHOT. And this doesn't only apply to shootouts; Ribeiro's goal scoring is down this season despite having several point blank opportunities on rushes and turnovers in front of the net. Don't get fancy and try to deke around the goalie: just shoot it.

Jason Pominville, Buffalo: Had two assists and sparks his team's comeback from a 3-0 deficit.

Steve Ott, Dallas: Had a goal and an assist and four hits. Was the team's most consistent forward and helped lead Dallas to a 3-0 surge. Made several great defensive plays in front of the net including a key deflection of a cross-crease pass in the third period.

Marty Turco, Dallas: Despite allowing four goals (again), Turco was brilliant late in the third period and in overtime and gave Dallas the opportunity to limp away with at least one point. His glove save on Derek Roy in overtime was perhaps his best of the season.

Coach Dave Tippett has talked about the desperation and recklessness the Stars need to get themselves back into the playoff race in the second half of the season, and his players showed that for spurts Thursday night.

But, in the end, a tired Buffalo Sabres team that had played the night before in Chicago wanted the extra point more.

Mark Stepneski talks about the turning point in the game:

The Sabres, who played the night before in Chicago and seemed to be running on fumes, got three power play chances in the second period and scored on one of them when Paul Gaustad tipped in a point shot by Craig Rivet. That pushed momentum their way and allowed them to keep pushing they tied the game.

Player quotes and game highlights after the jump.

Lack of commitment to the game in all aspects. The one-on-one battles we lost, and the consistency of our game did a complete 180. It's an embarrassment and a joke. We came to the first period and we dominated. We knew the task at hand and it slipped. It's plain not good enough. I don't think it was our defense, it was our puck play. We shot ourselves in the foot when we started turning pucks over.

We talk about teams that are struggling, but if you look at the standings we're right there with them, so we can't take anyone lightly. We need to play better and try to get two points. It's just a bad game. We had a really good start, and we let them come back. It's a great lesson for us. You can't stop playing, even with a three-goal lead. You've got to keep playing and stay smart.

We did some good things early and we were in full control, but we let it slip away. We changed our game, turned pucks over and handed them the momentum. We got away from our game and that's not something we can do any night. As a group, the D is scoring more goals and it feels good to chip in a little, but it would've been nice to get the win.

Thank God we had Turco back there or we may not have even gotten a point. It's disappointing.